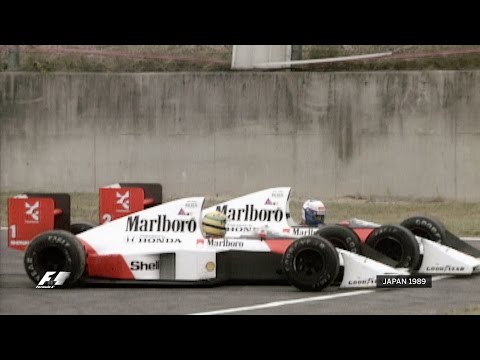 The 1989 Japanese Grand Prix (formally the XV Fuji Television Japanese Grand Prix) was a Formula One motor race held at Suzuka Circuit, Japan, on 22 October 1989. It was the 15th and penultimate round of the 1989 Formula One season. The 53-lap race was won by Alessandro Nannini for the Benetton team, from a sixth position start. Riccardo Patrese finished second for the Williams team, with Thierry Boutsen third in the other Williams car.

This race would become one of the most notorious in F1 history, as the culmination of Alain Prost and Ayrton Senna’s tumultuous two year rivalry as teammates at McLaren. The Japanese Grand Prix decided the 1989 Drivers’ Championship in Prost’s favour, after a collision on lap 47 at the final chicane between him and Senna put them both off the track. While Prost abandoned his stalled car, Senna restarted his, made a pit stop to change his front wing, and overhauled Alessandro Nannini to take victory. Following the race Senna was controversially disqualified for getting a push start from the marshals to rejoin the circuit, handing the title to Prost.