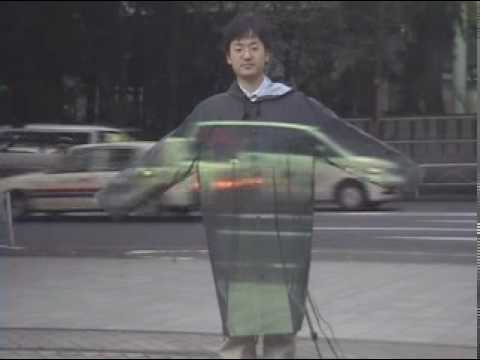 Camouflage or adaptive camouflage is camouflage that adapts, often rapidly, to the surroundings of an object such as an animal or military vehicle. In theory, active camouflage could provide perfect concealment from visual detection.

Optical camouflage is used in several groups of animals, including reptiles on land, and cephalopod molluscs and flatfish in the sea. Animals achieve active camouflage both by color change and (among marine animals such as squid) by counter-illumination, with the use of bioluminescence.

Military counter-illumination camouflage was first investigated during World War II for marine use. More recent research has aimed to achieve crypsis by using cameras to sense the visible background, and by controlling Peltier panels or coatings that can vary their appearance.

In 2003 researchers at the University of Tokyo under Susumu Tachi created a prototype active camouflage system using material impregnated with retroreflective glass beads. The viewer stands in front of the cloth viewing the cloth through a transparent glass plate. A video camera behind the cloth captures the background behind the cloth. A video projector projects this image on to the glass plate which is angled so that it acts as a partial mirror reflecting a small portion of the projected light onto the cloth. The retroreflectors in the cloth reflect the image back towards the glass plate which being only weakly reflecting allows most of the retroreflected light to pass through to be seen by the viewer. The system only works when seen from a certain angle.

Phased-array optics (PAO) would implement active camouflage, not by producing a two-dimensional image of background scenery on an object, but by computational holography to produce a three-dimensional hologram of background scenery on an object to be concealed. Unlike a two-dimensional image, the holographic image would appear to be the actual scenery behind the object independent of viewer distance or view angle.