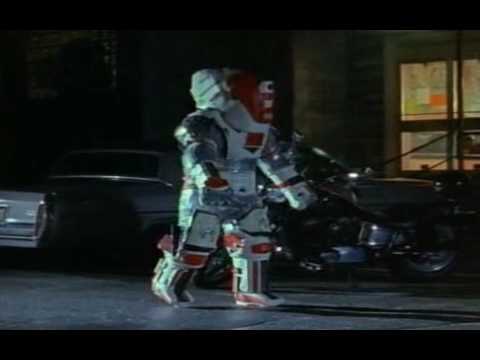 Project Grizzly is a 1996 documentary about Canadian inventor Troy Hurtubise. The film follows Hurtubise’s obsession with researching the Canadian grizzly bear up close ever since surviving an early encounter with such a bear. The film was directed by Peter Lynch and produced by the National Film Board of Canada who approached Hurtubise after reading his 1990 book White Tape: An Authentic Behind the Scenes Look at Project Grizzly.

After a dangerous but victimless encounter with a giant grizzly bear during a camping trip in 1984, North Bay, Ontario resident Troy Hurtubise is inspired to research the species up close. A scrap-metal merchant, Hurtubise builds a space suit-like “grizzly-proof” suit of armour inspired by the film RoboCop, which he calls “Ursus Mark VI”. The inventor works diligently to improve the $150,000 suit, continuously testing its resilience by subjecting himself to would-be injuries from moving automobiles and bar brawls. He then forays into the Rockies to track down the grizzlies he dreams of meeting. Hurtubise ultimately leaves without repeating the bear encounter, which director Peter Lynch optimistically notes is the only way “the quest [can live] on.

Following the release of the film, Hurtubise was awarded the 1998 Ig Nobel Prize for Safety Engineering by the scientific humor journal Annals of Improbable Research.

In 1998, following the theatrical success of the film, Hurtubise admitted to not liking the end result. “I told the NFB people we shouldn’t go looking for grizzlies in October, so what we do? We go looking for grizzlies in October,” he complained. He also criticizes the NFB for the humorous tone of the film which he claims failed to include much of his research, and says the five months he spent working on the film caused him to go bankrupt.

In 2001, Hurtubise took part in a controlled test with the help of an apprehensive bear handler in an undisclosed location to realize his dream of coming face-to-face with a grizzly bear once more. Wearing his Ursus Mark VI suit, Hurtubise stepped into a cage with both a grizzly and a larger kodiak. Neither bear attempted to attack him, leading him to conclude that a successful controlled attack would require a “bear suit that looks more human.”