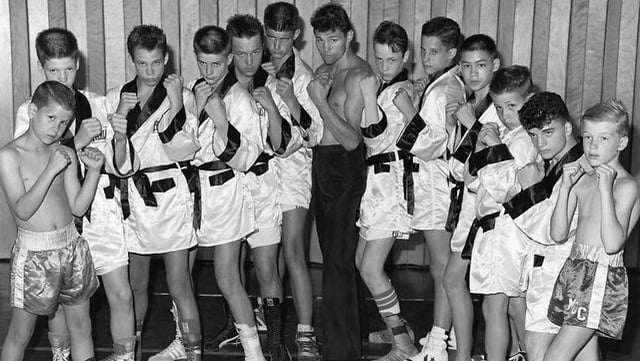 In mostly black and white and without narration, Weber introduces us to Andy Minsker, once a Golden Gloves champion, now shepherding a teen-age boxing team in Portland, Ore. With his muscular yet supple chest, bared through much of the movie, and his tough soft face, shaped by other men’s fists, Mr. Minsker could be one of Mr. Weber’s models, but he proves to be a lot more.

The camera angles in on face and chest as the boxer reminisces over the trophies he won as a lightweight amateur in the 1970’s and early 80’s, talks with his parents and stepparents, fools around with his boys, is happily embarrassed by the effusions of a waitress. His air of melancholy sweetness is echoed in the smoky airs of Julie London and Gerry Mulligan.

The most poignant scene in the movie, which opens today at Film Forum 1, is a halting conversation between the boxer and his father, whose own short ring career was an inspiration to the son. Both know now that the young man’s championship days are behind; something went wrong in 1984, when he wasn’t chosen for the United States Olympic team, leaving unfocused recriminations.

We learn enough about his boyhood - a broken family, a stepfather who beat him and his sisters so severely that he lost their custody (”A little pain builds character,” says the stepfather), never enough money (”I’m not a great provider,” his father concedes) - to be touched by the respect and affection the son shows for both sets of parents. His memory is kind, and it’s almost too easy to conclude that this boyish man is trying to be for his boys the model that he sought when he was growing up.

Mr. Weber can be intrusive, like a fighter who is more interested in showing off his footwork than connecting. Most of the photographic essays he inserts tell little about his subject, and the intermittent use of color seems arbitrary. But he can be inventive, as demonstrated by a comical interview with a little kid who for no particular reason is seated atop the shoulders of a bigger kid, whom he torments. And the final essay is a knockout. To Joni James’s ”Too Young,” we see shots of an exhibition match that tell everything about Mr. Minsker’s attachment to his little battlers and their own game spirit.